The double face of success!

The double face of success!

When experience over the years and skills come together for the benefit of serious business, the combination is certainly profitable. The biggest asset of a company is its team.

Pertito Agency successfully organizes private and corporate events for its clients. In addition to planning, organizing and conducting events, Pertito has its own department that deals with the technical support and rental of party equipment and equipment with professional parameters.

The distinguishing feature of this team are the versatile talents of the people behind this brand. Behind the image of a company that handles international forums, company events and shows equally well, there are people with multilingual training, artistic and musical talents, which makes the agency unique.

For Pertito, an event is successful not when it ends successfully, but when the customer returns again the following year.

Hristo Dimitrov – Tito. The engine of the company. A philologist who can think in his mind. Former radio journalist and current owner of one of the largest event agencies in Bulgaria. He has an enviable memory for situations that everyone has long forgotten. The Host Host of events at the Pertito agency – created for himself the impression of professional uncompromisingness and a salty sense of humor. He speaks English and Russian.

Antoaneta Alexandrova – The one who tries to break all the clichés in the industry. Responsible for the details of each event. If anyone needs to check spelling mistakes in a text – it is the person. She loves unusual ideas and acts with a swing when she is convinced that this will put an end to the “creativity” column – before everyone else. Related to the stage and music to this day. At the beginning of the year he shot a music video – a cover of the song All I ask. He speaks English and Spanish.

Victor Vassilev – The inexhaustible energy for achieving new goals. The movement does not tire him, but charges him. She has been dancing professionally for 8 years. Animator – practiced outside the country. He graduated from a German language school, but speaks English and break dancing. Created the label Mad Posta. Position in Pertito agency – responsible for everything!

Iva Ivanova – The singer with a wide smile. It is debatable for her whether English or French suits her better, as she sings and speaks both languages ​​perfectly.

Evgenia Vasileva – before her life path brought her to Pertito, played the role of Juliet at the age of 16. A professional actress with dozens of roles on stage and in the cinema, but in recent years her dreams of dancing on stage have come true. Due to her Russian origin, she is responsible for Pertito’s Russian-speaking customers.

Boyan Stoyanov – the most romantic figure in the male half of the team. Professionally connected with the Theater. As an ambassador of art, he strives to maintain the style and content of every event. He speaks English. 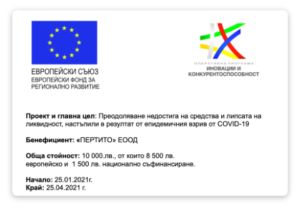